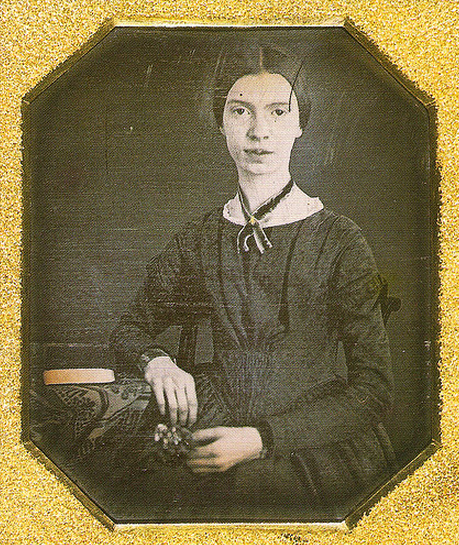 My essay on Emily Dickinson’s «Because I could not stop for Death», Nineteenth Century American Literature, University of Oslo, spring 2013

Because I could not stop for Death—
He kindly stopped for me—
The Carriage held but just Ourselves—
And Immortality.

We slowly drove—He knew no haste
And I had put away
My labor and my leisure too,
For His Civility—

Or rather—He passed Us—
The Dews drew quivering and chill—
For only Gossamer, my Gown—
My Tippet—only Tulle—

Looking for light through the cracks in Emily Dickinson’s poetry

It is a somewhat humbling experience, trying to provide an original interpretation of Emily Dickinson’s «Because I could not stop for Death». This is not because of its overwhelming qualities or volume. It has neither. Nor is it because of the author’s obvious grandeur, pathos or stature. She has none, at least not obvious. It is rather that her poems in general and no. 479 in particular are so thoroughly dissected, x-rayed and analyzed, that any originality in analysis is hard to provide. While analyzing this poem, there is also a huge divide to cross: the gap between the superlatives this poem has triggered and the low-keyed and at first glance seemingly stumbling verse lines. Something seems — borrowing from the poet’s vocabulary — slant.

The poem was first published abridged and edited. This thesis will concern itself with the original version, no 479 in The Norton Anthology of American Literature.

Emily Dickinson has a unique position among American poets. As a somewhat mythical figure, almost unpublished in her own time, her posthumous fame came fast, indicating that as a modernist or even postmodernist, she was some decades ahead of her time. «Because I could not stop for death» was most likely written in 1862 when the Civil War was raging, but its worst bloodsheds were yet to come. No battles took place anywhere near Amherst[1]. Some biographers have concluded that she had no relationship to the war[2]. Others are reluctant to do so. Nevertheless, young men did leave Amherst never to return. The poet’s fascination with death predates the war, however. Her living across the road from the Pleasant Street cemetery has been presented as one explanation. More urgent and closer to mind in 1862 may have been her quickly deteriorating eyesight.[3] She feared that she would go blind, and the illness made bright daylight unbearable to her, adding to her isolation.

She spent almost all her life in Amherst, apart from some years at school and a brief visit to Washington DC and Mt. Vernon, Virginia at the age of 24. Most of what she knew of the world came from that limited experience and an extensive reading of classics and contemporary writers.

The poem seems at first glance as a short story about a woman encountering Death, joining him on a slow afternoon carriage ride past playing children and fields of grass towards the sunset. They end up before what must be a cemetery, and the narrator reveals that this took place centuries ago. In form, it is a hymn stanza, frequently used in ballads, nursery rhymes and psalms and as a result known by heart by most readers, consciously or not. It consists of six quatrains, four-line stanzas. With one notable exception the stanzas are alternating between iambic tetrameter and iambic trimeter in a rhyming-scheme that loosely follows a pattern of A-B-C-B, effectively making the stanzas fourteeners, a common form in sonnets.

Dickinson sets out on this poem adhering strictly to the formal demands of the genre, demonstrating that the soon-to-come aberrations from it, of which there will be plenty, are there by choice and not for lack of skill. The first obvious break of form occurs in the second stanza, when the verse ends in a visual rhyme (away / Civility), which may pass for the eye, but not while reading out loud. Primarily, this draws attention to «Civility», which rhymes with the last word of the previous stanza, «Immortality» and the last word of the last stanza, «Eternity». It is also corresponds in tone and theme with the surprising feature of Death in the first stanza; that he «kindly» stopped. These slanted rhymes reappear, never completely off-kilter, but almost, still retaining some commonality like sounds, a letter or simply a repetition of the word itself.

Having broken form in the second stanza Dickinson juggles many tools of a modern poet. Starting with labor/leisure in the second stanza, alliterations are frequent in the third and fourth: School/strove, Recess/Ring, Gazing/Grain, Gossamer/Gown, Tippet/Tulle, all occurring on prominent lifts. The alliterations are less prominent in the two last stanzas, but there are some: seemed/Swelling, Ground/Ground, Centuries/shorter/surmised, Horses’/Heads. The third stanza also starts the passing of anaphoras: We passed and passed and passed all the way until the fifth stanza, where we didn’t pass, but rather paused, the author once again creating a sudden stop in the flow of the poem.

There also is paradox or irony at play in the description of Death as «kindly», in describing the inanimate grain as some cool observer «Gazing» and both irony and personification in anthropomorphing the Sun both into a being with both willful action and a sex in the fourth stanza. Portraying Death as a patient gentleman is a technique of the same category.

When first published — and in several later editions — the fourth stanza was removed entirely, the school children were not «At Recess — in the Ring», but rather «Their lesson scarcely done». And a cornice was no longer «in the Ground», but rather «but a Mound». In print and derivative works of music the fourth stanza is still largely missing. This stanza is the one in which the narrator halts, thinks and reconsiders, seemingly a pivot and an anchor for interpreting this poem. Its removal begs an explanation, which research for this essay has not uncovered.

The poem is strangely detached from the raging war, which was one that her family was against, her father being no abolitionist, more sympathetic to the South than many of his neighbors. Death in its human-like shape state in this poem is at times categorized as within the genteel tradition, as a Southern gentleman, which may be the most exotic creature young Elisabeth ever experienced on her once-in-a-lifetime trip to the northernmost parts of the South.

This appears to be a poem about death, but not death as the gory end her less affluent countrymen experienced in droves when this poem was penned. This is about the death of an isolated spinster with a family wealthy enough to feed her through her idleness. This is the death of a person so introvert that world stretches only as far as she can see, which is from her porch to the graveyard. This is the death of a person deeply imbued in the New England Puritan reading of the Bible, not harboring a shred of doubt that death will reward her, a view Eleanor Wilner calls a Calvinist view, seeking «neither forgiveness nor second chance.»[4]

On the other hand, maybe not. This poem may not be about a pleasant ride with death to the cemetery at all. It may be about Jesus Christ and his bride, Emily Dickinson. If looked at in postmodernist fashion, the poem actually states literally that miss Dickinson «could not stop for Death», yet readers seem to assume that she did.

There are three keywords at work here, placed first, last and at the first odd break: Immortality, Civility, Eternity. If cracks in style and odd breaks signify importance, the oddest break may be the most important. In the fourth stanza, where the rhythm of the hymn suddenly halts, parts of the narrator’s outfit is described, a gossamer gown and a tulle tippet. This may be common black funeral attire, but when in Emily Dickinson’s color of choice, white, it is not; it is bridal wear. If we reread the very first lines with this in mind and for once does not assume that «Death» and «He» are the same — and the poem never actually says so — the story transforms into another setting entirely. If «He» is the one who, according to legend, saves people from death and offer immortality and eternity, such an interpretation might help explain why her kin removed the fourth stanza before publishing. It may have been intended as an act of decency. Richard Chase[5] is somewhat nuanced: “The personification of Death, however, is unassailable. In the literal meaning of the poem, he is apparently a successful citizen who has amorous but genteel intentions. He is also God.”

The concept of passing is also central to this interpretation. This carriage ride may not be a review of her life, but rather a liberation from it. Keeping Emily’s physical condition in mind, her failing eyesight and hypersensitivity to light, images of gazing grain and a setting sun takes on a new meaning. This, which she fears she will lose, is now past. The ring of striving children, which she will never have, are now past. This mix of fertile ground — which gazes at her — and her own infertility, she passes with Christ, her groom and savior holding the reins.

The two last stanzas also are ripe for another interpretation when seen in this light. When the wedding-dressed couple arrive at the cemetery, they did not stop. They paused. They paused before a sepulchral house sinking into the underworld, like Christ’s empty tomb. Whatever its meaning is, the narrator was not heading in that direction, but in the direction of the Horses’ Heads – toward Eternity.

A definite conclusion is hard to reach, and that may have been the poet’s intention in the first place. This could be a poem about a journey towards death. This could be the story of an escape from it. The ambiguity may very well be intended, and the first publishers’ cuts and edits do not lend weight to the early interpretations. Whatever the correct answer is, if there indeed is one, the poem is a display of poetic craftmanship within a familiar universe of imagery. In the shape and form of this poem, Emily Dickinson built a perfect framework and then wrought and chiseled cracks in it. For this essay’s interpretation, at least, that’s how the light gets in.[6]

[1] Gene Thorpe, Battles and Casualties of the Civil War Map

[6] From «Anthem» by Leonard Cohen, «There is a crack, a crack in everything. That’s how the light gets in.»